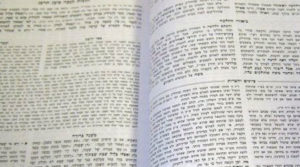 The root of the Hebrew term used to refer to Jewish law is, halachah. Halachah means, “go” or “walk.” Halachah, then, is the “way” a Jew is directed to behave in every aspect of life, encompassing civil, criminal, and religious law. In this section you can learn about various Rabbinical rulings concerning halachot and minhagim. Become a woman who knows the halachah, walks in His ways and shares it with others.

Be sure to check back every other Sunday as new Halachot are added.
(Adapted from Rabbi Eli Mansour’s “Daily Halachah and edited by Rabanit K. Sarah Cohen)

Should one expose the tzitzit of his Talit Katan?

Twice in his presentation of the laws of Tzitzit, the Shulchan Aruch states that the Talit Katan should be worn over one’s clothing, so that he sees the Tzitzit at all times and thereby be reminded of the Mitzvot. According to the Shulchan Aruch, the entire garment of the Talit Katan should be worn over one’s outermost garments (like many Chasidim do today).
The Mishnah Berurah, strongly condemns the practice of those who tuck the Tzitzit inside their pants, rather than leave them exposed. It states that doing so not only undermines the purpose of Tzitzit – “you shall see them and remember all the commandments of G-d” (Bamidbar 15:39). But it also denigrates the Mitzvah. The Mishnah Berurah adds that a person who received a garment as a gift from a king would proudly expose it for all to see; all the more so, then, should one make a point of exposing the Tzitzit. Those who conceal them, the Mishnah Berurah writes, will one day make an accounting for this shameful practice.

However, the view of the Ari Hakadosh (a”h), as recorded and understood by his talmid, Rabbi Chaim Vital (a”h), and by the Chid”a (a”h), was that the Talit Katan – both the garment and the Tzitzit strings – should not be exposed. Ha’Rav Ovadiyah Hadaya (a”h), in his sefer Yaskil Avdi, cites other mekubalim who followed this view, as well.

Therefore, Sefaradim, who generally follow the laws and customs of the meukablim, should keep their Tzitzit tucked into their garments. Chacham Bentzion Abba Shaul (a”h) cited his mentor, Chacham Ezra Attia (a”h), as remarking that any Sefaradi that exposes his Tzitzit denigrates and casts aspersions on the previous generations of Sefaradim, who followed the practice of keeping the Tzitzit concealed. Rabbi Yehuda Tzadka (a”h) testified that the esteemed Rabbi Yaakov Chaim Sofer (a”h), author of Kaf Ha’chaim Sofer, likewise kept his Tzitzit inside his clothing. The same is said concerning the prominent mekubal Rabbi Efraim Cohen (a”h) and this is the ruling of Ha’Rav Ovadiyah Yosef, in his sefer Yechaveh Daat.

This website uses cookies to improve your experience. We'll assume you're ok with this, but you can opt-out if you wish.AcceptReject